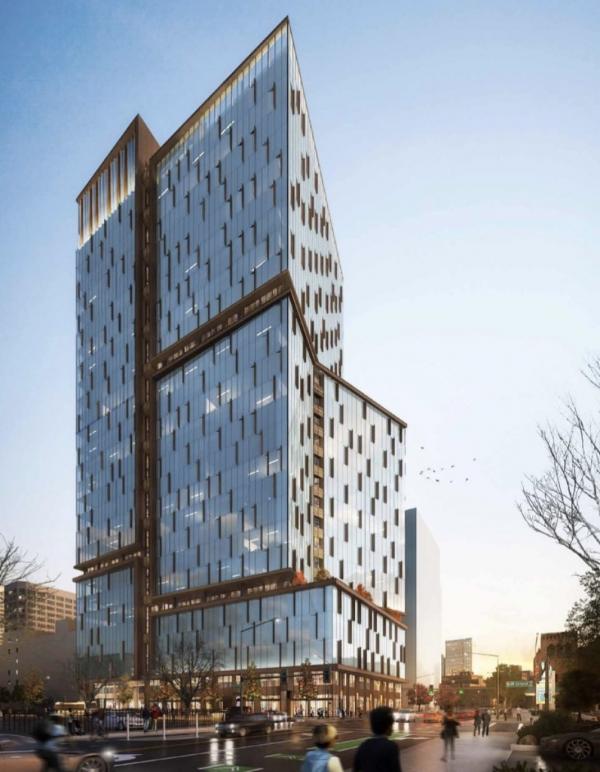 San Francisco-based real estate development company TMG Partners first broke into the Oakland real estate market in 2015 with the purchase of 1330 Broadway, as the downtown Oakland commercial real estate market has continued to heat up. Now, in a true show of faith in the market’s steady future, TMG Partners is preparing to break ground on its first ground-up development in the city, at 2201 Valley St. in the Uptown District. TMG Partners first submitted a pre-application to develop the full city block between Telegraph Ave., Valley St., West Grand Ave. and 22nd St. into a 760,000 square foot office development a year ago in January 2018.

“2201 Valley gives us the opportunity to balance out the Bay Area’s traditional regional job centers and to further add to Oakland’s distinctive identity as the center of dynamism and diversity,” said TMG CEO Michael Covarrubias, in a January press release. “The proposed building’s large open floors, high-ceilings and column-free spaces – made possible by the engineering required to span the BART tunnel that runs beneath the site – form the kind of creative work space that growing companies crave.”

The current project site contains two parcels, 2200 Telegraph Ave. and 2201 Valley St., occupied by an A&A Gas & Mart and a surface parking lot with 74 spaces. Both sites, which are separately and privately owned, will be demolished to make way for the 420-foot-tall, 27 story building, which will total 896,931 gross square feet. The project will accommodate approximately 350 vehicle parking spaces and 197 bicycle parking spaces spread over 108,865 square feet, a rooftop terrace and several other private open spaces, totaling 26,822 square feet. 16,805 square feet of ground floor commercial, arts and retail space is also included in the plans, as is a 6,000 square foot office lobby. Other auxiliary use spaces, such as a café, are also planned for the project.

The building will be designed by Solomon Cordwell Buenz (SCB), and renderings show fanned, stepped façade broken up by outdoor terraces and landscaped decks, with 30-foot ceilings for the ground floor commercial space.

The 0.89-acre project site is easily accessible, since it is within two blocks of the 19th St. BART station and a quarter mile east of Interstate 980. The surrounding neighborhood is one in transition; to the north existing land uses include a preschool, while to the south is a restaurant and commercial space — formerly Space Burger — which sits vacant. The Telegraph Plaza Parking Garage and a City-owned two-level parking structure with 351 spaces are also nearby, although both lots are proposed to be developed into the Eastline Project, according to City documents. The First Baptist Church of Oakland on Telegraph Ave. and the Breuner Building on Broadway are also nearby, as are several eateries such as Starbucks, Tierra Mia Coffee and Ike’s Love and Sandwiches.

The City of Oakland released its environmental report on the development at the end of 2018, Before the project can proceed with breaking ground, however, several discretionary actions are required by city departments, including the issuance of a Conditional Use Permit and a Demolition Permit. Other key agencies such as the Federal Aviation Administration and BART also must weigh in on the project before construction can proceed.

The 2201 Valley St. project is the first ground-up project TMG Partners has taken on in Oakland; the real estate development firm currently owns and renovates two other properties in the City, at 1330 and 2201 Broadway.

The Oakland office market continued to surge forward during the end of 2018, according to a report released by Colliers International, thanks to steady Gross Domestic Product (GDP) growth in the region and across the greater Bay Area. Office vacancy in the area remained low at 6.2 percent, although Colliers stated in its report that absorption could pull back in the future due to constraints on supply.

TMG Partners did not immediately respond to The Registry’s request for comment.