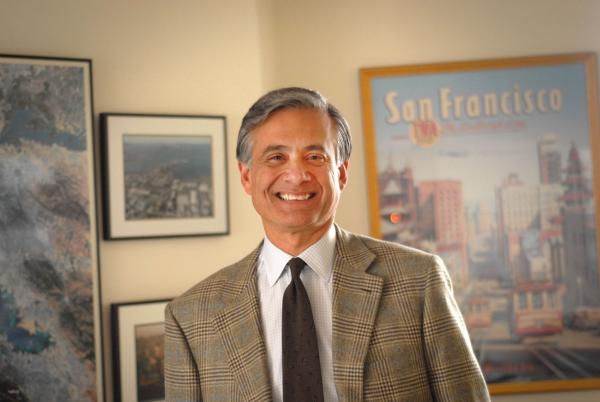 The Bay Area Council Executive Committee and Board of Directors on Wednesday (July 26) welcomed new Chair Bernard J. Tyson, Chairman and CEO of Kaiser Permanente, and applauded the immense legacy of his predecessor, TMG Partners Chairman and CEO Michael Covarrubias, for his two years of strong, focused leadership. The passing of the gavel occurred during a meeting generously hosted by member company and global investment firm BlackRock at their stunning San Francisco office.

During his tenure as Chair, Covarrubias led the organization through a period of significant growth and achievement marked by a series of historic wins in Sacramento to advance the Council’s robust policy agenda. Tyson, who takes the helm as the 38th Chair in the organization’s 72-year history, is a tremendous business leader recognized nationally and regionally. As a longtime member of Council’s Executive Committee and most recently as Vice Chair, he has provided important leadership and engagement across all of the Council’s policy areas.

Council Board Member and BlackRock Vice President Anthony Bassili and Managing Director Debbie McCoy warmly welcomed the group and kicked off the Board meeting. The Board also heard from Tipping Point CEO Daniel Lurie on fighting poverty and chronic homelessness in the Bay Area. Since 2005, Tipping Point has raised more than $150 million to educate, employ, house and support those in need in the Bay Area.

In a series of lively reports, the Board of Directors heard from policy committee chairs on the great progress the Council is making on its lead priority issues. Heller Manus President Jeffrey Heller reported on Commute Improvement; Genentech Vice President Carla Boragno on Workforce Housing; and Union Bank Managing Director Julius Robinson on Workforce of the Future. Special thanks again to BlackRock for hosting us.