A Big, Bold Concept From the Ground Up 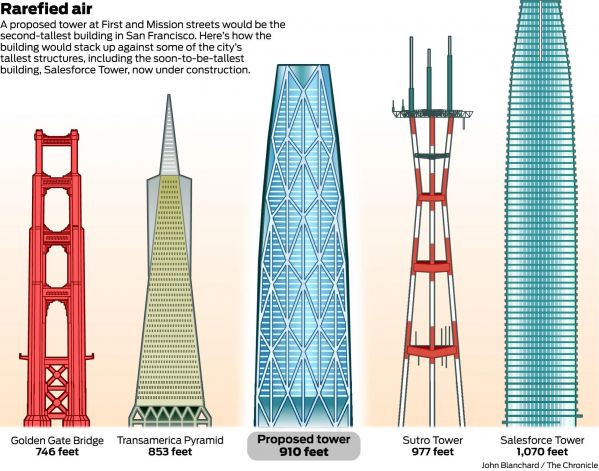 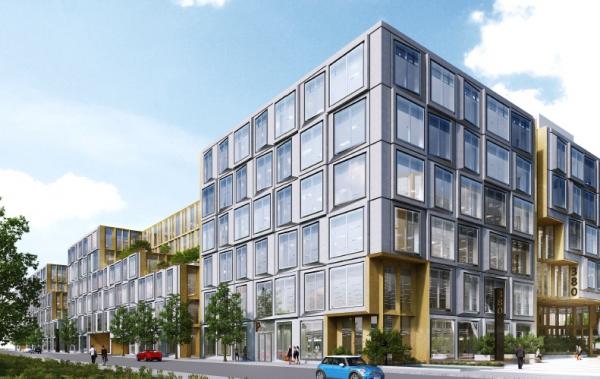 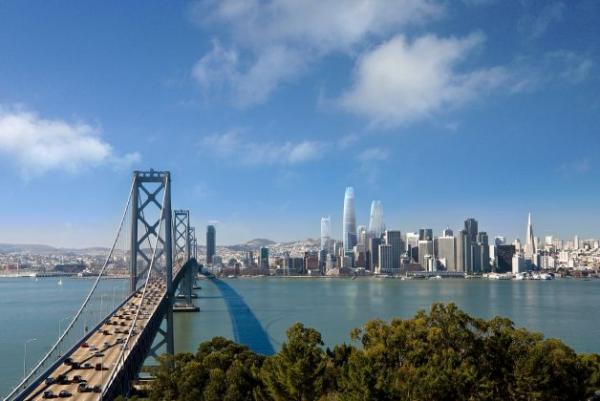 A rendering shows the proposed futuristic tower at First and Mission as it would appear to the right of the 181 Fremont tower and the taller Salesforce Tower. 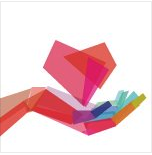 San Francisco Chronicle
A Big, Bold Concept From the Ground Up
by John King

A new pair of towers proposed for downtown San Francisco would include the city's second-tallest building - and perhaps its most startling public space, an open-air plaza set beneath the main tower's elevated first floor.

The project straddles the northwest corner of First and Mission streets, with a 605-foot tower on Mission and a broad 910-foot high-rise on First. By comparison, the Salesforce Tower under construction on the southeast corner will top off at 1,070 feet.

Amid all this, plans for the project submitted to the city call for three small buildings at the northwest corner to remain, fragments of the aged city among the colossi of the new.

"We like maintaining that historic connection," said Michael Covarrubias, president of TMG Partners, the developer. "Those three buildings capture the fabric of the city and where it has been."

The lead architect for the project is Foster + Partners, the celebrated English firm doing the doughnut-shaped Apple headquarters in Cupertino. If built as now envisioned, the San Francisco tower would be equally futuristic, with brawny structural columns slicing across a mid-block space 80 yards wide. Except for the elevator lobbies at the rear of the plaza the tower would begin 70 feet in the air, clad in glass and held in place by diagonal columns forming giant X's along the outer walls.

"The way you walk along and through that building will be different from anything that you've encountered before," promised design director Stefan Behling of Foster + Partners, which is working on the project with local architecture firm Heller Manus. "The goal is that it will be fully public, open to the air. ... A space of this scale has the potential to make people go 'wow.' "

The sci-fi sheen will be all the more pronounced in contrast to the structures that will remain on and around the site. In addition to the three buildings at the corner - only two of which TMG owns - the plaza would bump against a four-story red-brick structure from 1906 on Ecker Street, one of several alleys that flow around the site. Eight-foot-wide Elim Alley, the narrowest in the city, would stay intact as well.

"We love that parts of the block are slightly rough around the edges, with secret routes and tight alleyways," Behling said. "What we do has to feel relaxed, not corporate. If it goes too slick, we won't achieve what's possible."

If the main tower is unusual in terms of how it meets the skyline and the street, the girth is a throwback to towers of the past.

The lower 20 stories or so would be 240 feet wide, equal to the broad side of the slab towers at Embarcadero Center. Those floors would hold 31,000 square feet of space, much larger than the floor dimensions of downtown office buildings from the past 15 years. Lower floors at Salesforce Tower, the high-rise across the way set to open in 2017, will be 26,600 square feet.

These dimensions are allowed under the city's plan approved in 2012 for the blocks around the Transbay Transit Center. The only bulk requirements are that towers above 550 feet in height must be 25 percent more narrow at the top than the bottom, which the proposed design does by tapering the north and south sides - a taper that also keeps the building from casting excessive shadows on nearby public parks.

Developer Covarrubias said the target is for the project to be approved next summer, with construction to begin in early 2016. While the paperwork has just been filed, details of the project were shown last month to city planners in a session that included a presentation from Lord Norman Foster, who founded his firm in 1967 and has received such honors as the Pritzker Architecture Prize and the American Institute of Architects' Gold Medal.

This isn't the first skyline-popping proposal for the corner with a marquee architect in charge.

In 2006, another developer assembled the site and hired Italy's Renzo Piano, best known locally for the California Academy of Sciences. Piano responded with a collection of six slender towers ranging in height from 600 to 1,200 feet, which he likened to bamboo reeds. A proposal was filed, but the project went nowhere as the economy sagged into deep recession. Lenders foreclosed on the property and held it until last year, when TMG teamed with Northwood Investors to purchase it.

Covarrubias dismissed any concern that another unusual tower project from the office of a fabled designer might signal another bubble soon to burst.

"We came into this looking at a long-term financial cycle," he said. "This is a site and a design that's irreplaceable."

Besides the First and Mission site, TMG is part of a development team preparing to build a 400-foot residential tower nearby at First and Folsom streets. Foster + Partners is the architect for the Apple Store soon to begin construction at Union Square, and Heller Manus is the architect of 181 Fremont St., a slender, 802-foot tower with offices and housing now under construction.