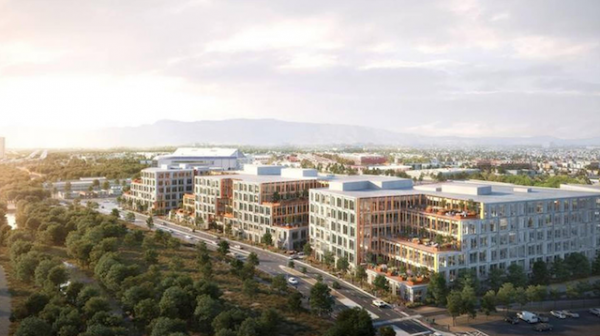 SAN JOSE — Three big developers have grabbed a stake in what’s deemed to be a potentially game-changing project in downtown San Jose, a proposed million-square-foot tech campus perched near the banks of the Guadalupe River and the edge of Google’s future transit village.

Boston Properties has obtained an interest in the Platform 16 tech campus, a city-approved project being developed by TMG Partners and Valley Oak Partners that’s expected to be marketed to one or more tech or telecommunications giants.

The involvement of Boston Properties in Platform 16 suggests that a widening array of major developers are interested in downtown San Jose. In recent months, big players such as Jay Paul, John DiNapoli, Sobrato Organization and Gary Dillabough have either bought large properties at key development sites, or have unveiled plans for major projects on properties they own.

The Platform 16 project is bounded by Autumn Parkway, West Julian Street, North Autumn Street and a railroad line, and is just south of a Target store that’s part of the bustling San Jose Market Center. It’s also on the edge of areas where Google has collected numerous properties for a future transit-oriented development near the Diridon train station and SAP Center.

Boston Properties has obtained an option to buy at least a portion of the Platform 16 development site and also has bought a ground lease from TMG and Valley Oak Partners on the property, according to several Santa Clara County public documents. Boston Properties paid $2.8 million in multiple transactions to obtain the ground lease and purchase options, with the most recent one occurring on Jan. 23, the county records show.

A ground lease means TMG and Valley Oak are renting land for the development to Boston Properties, and Boston would own one or more buildings that would be constructed on the site. Boston and TMG didn’t comment about the specifics of their joint efforts, when asked by this news organization to discuss the situation.

Separately, TMG and Valley Oak, acting through an affiliate, have paid $38.2 million to buy the site through a series of transactions, with the most recent one occurring on Jan. 24.

The joint venture of TMG and Valley Oak also has obtained a $30.1 million loan to finance its purchase of the land and existing buildings on the 5.4-acre site, county documents show.

The Boston Properties interest in the site would bring to the project a company with plenty of financial muscle to add to the considerable resources of TMG and Valley Oak Partners. During the one-year period that ended in September, Boston Properties, a real estate investment and development company, earned $527.6 million on revenue of $2.67 billion, according to the Yahoo Finance site.

“Boston Properties is one of those developers with ongoing relationships with big tech companies,” said Bob Staedler. principal executive with San Jose-based Silicon Valley Synergy, a land use and planning consultancy. “Boston Properties getting involved with Platform 16 is more fuel for the fire for downtown San Jose.”

TMG and Valley Oak have gained final approvals from the city to build the campus, which would consist primarily of three big modern office buildings. The sellers of the parcels for the campus were trusts controlled by the Michael Akatiff family or an Akatiff company called Pacific Coast Cycle, the county documents show.