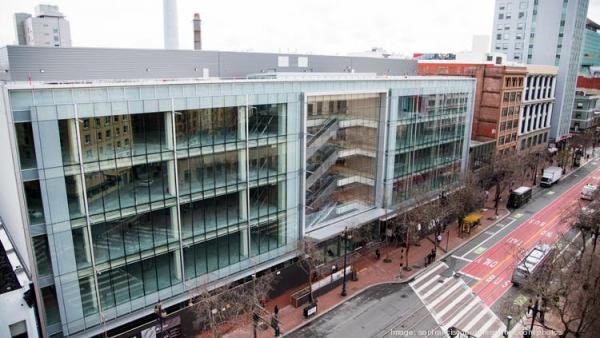 Biotech real estate giant Alexandria Real Estate Equities Inc. and TMG Partners are teaming up to buy 6x6, a mall near Union Square in San Francisco that has sat vacant since it was built.

Terms of the deal were not disclosed, but Alexandria, one of the region's largest biotech developers and landlords, confirmed that it closed on the purchase of 945 Market St.

"We are excited to be bringing this important property under local control and look forward to securing a mixed-use project with a strong retail presence," Pasadena-based Alexandria (NYSE: ARE) said in a statement.

The project sits a few blocks from Union Square, San Francisco's premier shopping district. The location in Mid-Market continues a years-long transformation from rundown and crime ridden to a neighborhood now home to tech companies, new hotels and thousands of new homes.

Neither Alexandria nor TMG would comment about their specific plans for the property.

San Francisco-based TMG Partners is one of the Bay Area's largest development companies with about 6.3 million square feet of space in their pipeline. Alexandria has more than 5 million square feet along the Peninsula — from San Francisco's South of Market district and Mission Bay, where it has been the primary biotech developer and a partner with the Golden State Warriors in two office towers on the team's new Chase Center arena site, through South San Francisco and to near Stanford University.

Seth Siegel, a broker with Cushman & Wakefield who was not involved in the sale, said 6x6 offers "a good opportunity to reposition a new construction project."

"Alexandria has had success branching out of Mission Bay with other projects in San Francisco," Siegel said.

In 2017, Cypress Equities CEO Chris Maguire told the San Francisco Business Times that adding some office tenants to 6x6 would accommodate "retailers that want to have a showroom with space for office."

"We have this unique interest for office, so if it makes the project better to have it, we'll have it," Maguire said. "We may never pull the trigger on office here, but this isn't fundamentally different from the way we envisioned this project. This is a retail project, so if the retail is not successful, the project is not successful."