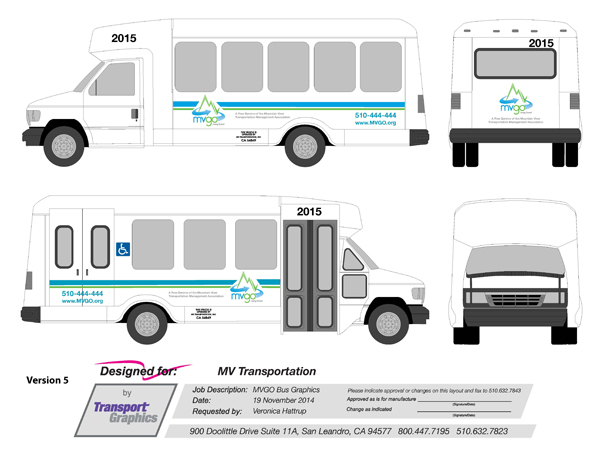 Dec. 06--Beginning next month, half a dozen white 20-seat shuttle buses with blue and green accents will whisk commuters between the campuses of some of Mountain View's biggest name companies -- for free.

The initiative sprung from a public benefit commitment made by TMG Partners last year when it received the City Council's approval to build a 385,000-square-foot campus for Samsung Electronics Co. Ltd.'s research and development subsidiary at 625-685 Clyde Ave., near the intersection of Highway 101 and Ellis Street.

Denise Pinkston, a partner with TMG Partners and chairwoman of the transportation management association, said the nonprofit has had "terrific success" in getting companies to pledge their resources to reduce citywide car traffic.

"The idea was to create a nonprofit umbrella that companies could join over time, so what any single employer could do by themselves to run a shuttle to Caltrain would be amplified and made far more efficient and robust by having many employers pay for the same shuttle on a fixed route rather than having shuttles going separately to each employment campus," Pinkston said.

MVgo shuttle buses will make 30 stops along three routes in the city's East Whisman, East Bayshore and West Bayshore neighborhoods. From Monday through Friday, the shuttles will take commuters from Caltrain and Valley Transportation Authority train and bus stops to companies that are members of the association. Residents can hop on for free too if they have a meeting at one of the companies or would like to visit a shopping destination on the buses' routes, Pinkston added.

"The principal goal is to reduce vehicular trips by providing shared last-mile shuttle services from the Mountain View transit hub to workplaces throughout the city," said Rachel Grossman, Google's real estate project executive and vice chairwoman of the association. "[MVgo] has the potential to reduce vehicular trips and associated congestion, which could ultimately result in improved traffic flows, better quality of life and reduced greenhouse gas emissions."

Pinkston estimated that about $335,000 has been spent on start-up costs, plus about $200,000 worth of in-kind services such as business plans, requests for proposals, branding and consultants' fees. Once the shuttles are up and running, the service will cost approximately $1 million per year.

"To my knowledge, there is no other model where this number of landowners and private employers have come together to pool funds to run services that they previously ran by themselves for the sole benefit of their employees," Pinkston said.

MVgo buses will also feature bike racks and real-time locators so riders can track where the shuttles are at all times. The service's "real-time tracking" function will be available on its website.

The association collaborated with the Community School of Music and Arts to host a logo design contest. The art work of Jamar Pagpagpuitan, a South San Francisco resident and senior at Summit Public School: Shasta in Daly City, was selected from among those of more than 100 participating arts students.

"We thought [Jamar's] design was really quite brilliant," Pinkston noted. "He essentially has a bus going around Mountain View so we adapted his design to create not only the logo but also the name of the service -- MVgo."

MVgo is separate from the Mountain View Community Shuttle, which is part of a two-year pilot program that's also scheduled to launch in January. The two differ in that MVgo is a "commuter" shuttle while the city's is a "community" shuttle, Pinkston said.

"We're proud to be at the forefront of employing innovative transit strategies ... to help us grow responsibly and sustainably," he said. "This will undoubtedly take many more cars off our roads and help us achieve our aggressive single occupancy vehicle reduction goals."