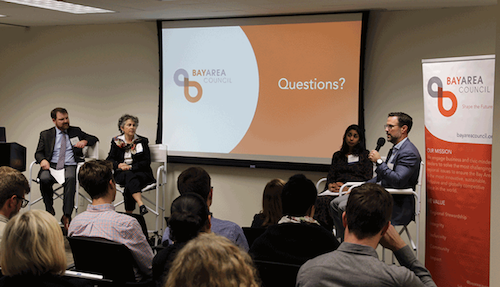 In the past three years, the California Legislature has passed more than a dozen housing reforms addressing a swath of issues, including tenant protections, rent gouging, production of accessory dwelling units (ADUs), streamlined permitting for affordable and market-rate housing, new funding sources, and more. Though the pace may seem slow, there are signs of progress and hope for more in the future, said panelists at a ULI San Francisco event.

“We were able to pass reforms that by themselves maybe don’t look very significant,” said Matt Regan, senior vice president of public policy at the Bay Area Council, a San Francisco–based business association. “But layered together, we’ll see in the years to come that they will be quite consequential.”

Before a packed room of ULI members in late January, Regan moderated a panel that included Denise Pinkston, a partner at developer TMG Partners; Geeta Rao, deputy director at Enterprise Community Partners; and Michael Ghielmetti, founder and president of Signature Development Group. The panelists discussed the recent legislative successes; the impacts planners, developers, and housing advocates are already seeing from new legislation; and the legislative work still to come.

The 2017 legislative session kicked off the multiyear string of housing victories in the state Capitol. Legislators eased ADU regulations, leading to a spike in permit requests for backyard cottages and basement apartments. They also increased the transaction fee on real estate recording documents to help fund affordable housing construction, strengthened the existing Housing Accountability Law to make it harder for municipalities to deny development proposals that meet local requirements, and streamlined the permitting process for developments in municipalities that are not meeting their mandatory minimum housing production allotments.

Momentum continued in 2018 with new laws that allowed student housing development to take advantage of the state density bonus, gave the Bay Area Rapid Transit agency authority to rezone the land it owns around stations, and further strengthened the Regional Housing Needs Assessment law to make it harder for cities to shirk those mandatory allotments of housing development.

Regan said that of the 12 years he has been working on Bay Area housing policy, the 2019 legislative session led to “the most consequential set of initiatives and progress we’ve seen in housing.” Lawmakers passed five bills to further reform ADU regulations, limit the amount landlords can raise rent each year, streamline permitting for “missing middle” housing, limit the ability of cities to “move the goalposts” on zoning and land use requirements once a permit has been issued, and, perhaps most important, create a new entity called the Bay Area Housing Finance Authority (BAHFA).

The 2019 bills all came out of an 18-month process by the Committee to House the Bay Area (known as CASA). Composed of elected officials, developers, planners, affordable housing and tenant rights advocates, and other stakeholders, the group produced 10 key policy recommendations for building more market-rate and affordable housing, improve tenant protections, and preserve existing affordable housing.

Denise Pinkston, who served on CASA, said the coming together of a broad range of housing stakeholders was essential for success. “You need to get to a place in the middle between people who fight each other for a living where you can say this can work,” she said.

Stakeholders brought that attitude to Sacramento in 2019, which resulted in far better outcomes than many longtime observers expected. “I thought the CASA recommendations would just get chewed up and spit out because legislators don’t care about anything the Bay Area does,” Regan said. “But because the stakeholder groups all stood together and advocated for all of each other’s bills, it led to success.”

BAHFA is a critical new entity to come out of 2019. The authority will finally allow the Bay Area to raise revenues for housing at the county and city level. Step one for BAHFA is a ballot measure this fall that could generate up to $1 billion for affordable housing production and preservation, rental assistance, eviction protections, and other housing needs.

Of course, three years of housing reforms in the Capitol has not eliminated the on-the-ground challenges that developers, advocates, and others in the housing world face.

For example, Ghielmetti said the suburban city San Bruno south of San Francisco denied his firm permits for a 425-unit project that met or exceeded all the zoning and land use requirements asked of it. The difference now is that Signature has more firepower to push back against the decision than it did before some of the new laws were passed. The project is currently tied up in that legal limbo, but Ghielmetti said having a clear case that the city is violating the law is working in his favor, as is the fact that under newly passed state laws, Signature could actually come back with a legally sound case for an even larger development.

Though the last three years marked significant progress, the panelists agreed significant work remains. The CASA work is officially finished, but several policy recommendations that came out of that process have not been considered by the legislature yet. Much of it involves changes to encourage production of missing-middle housing for people earning 100 to 150 percent of the area median income. A new group born out of CASA—the Three Ps Coalition for Housing Production, Protection, and Preservation—is taking up the mantle of continuing that work, centering its efforts on production, protection, and preservation of such housing.

Pinkston said the recent success is just the beginning of an extended effort; messy, systemic, entrenched housing crises do not get fixed quickly.

“I think we’re in a generational sea change brought about by the magnitude and really horrific outcomes of the housing crisis,” she said. “There’s going to be a new dialogue as the next generation of Californians grows into political power because I think our kids see these issues really differently than their parents. This is a many-decades-long thing that we have begun to take on, and it’s not going to get fixed fast.”