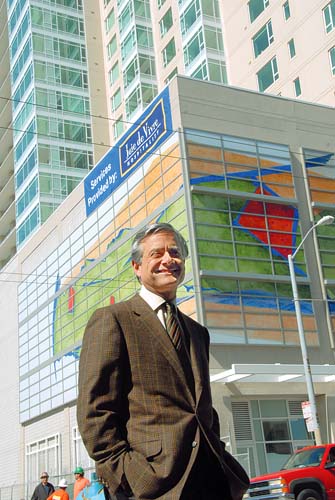 San Francisco Business Times
It's TMG vs. The Blackbird at 208 Utah St.
by J.K. Dineen

But when they bought the brick 208 Utah St. this week, Covarrubias and his battle-scarred team inherited a challenge that is new perhaps even to them: a crazy blackbird.

Over the summer, Facebook was abuzz with anecdotes from tenants at 208 Utah St. who had been dive-bombed by a shiny Brewer's Blackbird as they entered or exited the building. Techies from companies like Trulia and Flixter tell of swinging windbreakers and purses to protect themselves or their lunches from Whole Foods, while others describe diving into cars or doorways as the bird pecked an ear or attempted to nest in a hairdo.

The Facebook page group "I was attacked by the bird outside of 208 Utah St. in San Francisco" has 92 members. One has the impression that watching unsuspecting visitors encounter the bird was highly entertaining to workers on upper floors, if not beneficial to shareholder value.

"There was no negotiating with that maniac!" wrote one employee who was attacked twice in a day.

The bird seems to have settled down in autumn, probably because whatever babies were nesting in the office building grew up and flew away.

But come next spring, TMG beware: the over protective but entertaining momma bird of 208 Utah St. will be back.