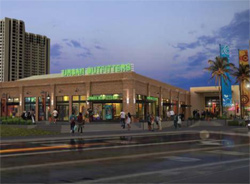 This was no Black Friday crowd standing in line outside a store in the Los Angeles suburb of Sherman Oaks two months ago. No, it was only March, and no mild or sunny day either, but a rainstormy Sunday. Still, about 100 showed up at this grand reopening of a former Borders store as a T.J.Maxx. Perhaps it was apropos. When Borders filed for bankruptcy protection in February 2011, the company left 400 stores on the chopping block. At its liquidation last summer, 200 more stores went dark. As it happens, prime locations like this Sherman Oaks site have leased out quickly to opportunistic retailers like T.J.Maxx, which has managed to thrive in this difficult economy.

To be sure, healthier booksellers have proved eager for these vacant Borders sites. Books-A-Million leased out 41 of them, and Barnes & Noble grabbed up a number too, plus the Borders online domain. But other types of businesses and organizations have gotten in on this, even institutions of higher learning: Vanderbilt University, in Tennessee, and Fairfield University, Connecticut, each turned a former Borders into a campus bookstore.

Whole Foods has taken several, including in Mission Valley, Calif. There, a bidding war broke out for the old Borders space, according to Spence Mehl, general counsel of New York City-based RCS Real Estate Advisors, which was involved with the deal. Walgreens plans to open a drugstore in a vacant 24,000-square-foot Borders in Boston.

It is anyone's guess just how much vacant Borders space is still available, but whatever is left is problematic real estate, experts say. "Borders had good real estate, but it was challenged," Mehl said. "A lot of it was on two floors, which doesn't work for most retailers."

Houston is an example. Since the onset of the recession, that market has developed precious little real estate, less than at any other time over the past 30 years, according to Jason Baker, a partner at Baker Katz, a Houston-based real estate brokerage firm. And yet, five Borders stores sit empty. Baker says he believes the Dallas market is in a similar state. "This has been a real head-scratcher," said Baker. "The biggest challenge, without a doubt, is that these spaces sit on two levels. Landlords are having to get really creative on how they backfill these spaces."

Douglas Green, a principal at Philadelphia- based brokerage firm Michael Salove Co., is trying to lease two of the eight bookstore locations in that market, which has similar issues. Size is another constraint. The spaces are too big for the affluent suburban areas along Philadelphia's Main Line (the string of towns built along the old Pennsylvania Railroad line). "Every single broker will tell you in this market that the process is going a lot slower than expected," Green said. Indeed, no one could have anticipated this, he says, given how swiftly the market's Linens 'n Things and Circuit City spaces had gone.

Up to now, landlords have held out for better options. But co-tenancy clauses that allow tenant rent reductions from landlords if key anchors or a certain number of retailers vacate space may be forcing landlords to act now. Many Borders stores have been closed for six months or longer. "Landlord were getting nice, big, fat rents from Borders," Mehl said. "It's starting to set in, and what you're going to see is creativity."

Then there is the question of what to do with any post-division leftover space. Weingarten Realty Advisors, a Houston REIT that owns 380 shopping centers nationwide, chose to carve out some office space for its own use at the back of one of its centers in Atlanta. "When we chop up a box, we have dead space in the back," said Patty Bender, executive vice president and director of leasing at Weingarten. "We thought we would have that, but we were enticed to move to that space for our central mid-Atlantic offices. We will open in August." The firm will be sharing the space with Massage Envy, Party City, The School Box (a teacher's supply store) and two restaurants.

In an old Borders at the Emeryville Public Market, in the San Francisco Bay Area, Urban Outfitters will share space with Guitar Center, according to TMG Partners, the property's developer-managers. In New York City Winick Realty Group brokered a deal for a Duane Reade, which says it will open a store by early this summer in part of the three-level Borders in the financial district. Owner Madison Capital divided the space in two. Duane Reade will occupy half of the ground level space plus the entire upper floor. The remaining space is now being marketed.

"Our first choice would be a fashion retailer," said Darrell Rubens, executive vice president of Winick, which began marketing the space in March.