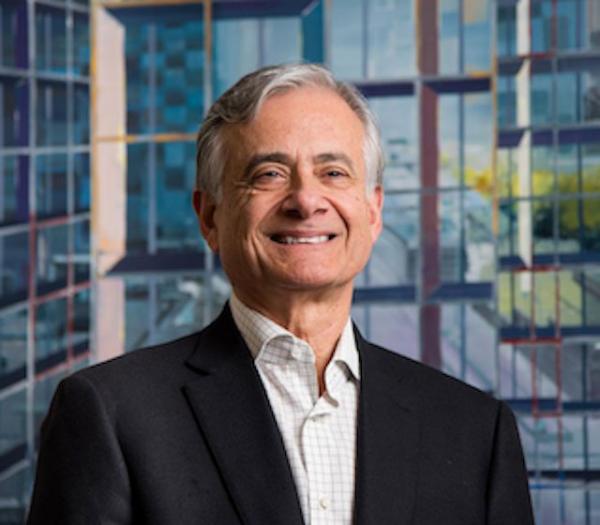 Michael Covarrubias likes to say that he got into real estate “by accident,” at the urging of a colleague back when he was a banker during Silicon Valley’s computing boom of the 1980s. At TMG partners, the San Francisco real estate firm he’s helmed for the last 24 years, Covarrubias says he’s “been lucky a lot” in amassing a portfolio spanning tens of millions of square feet across the Bay Area.

Despite a schedule stretched thin between meetings about a new Oakland tower or overhauling the old California Pacific Medical Center into housing and his several board chairships, Covarrubias still prefers to meet in person rather than talk over the phone. Google hangouts aren’t in his repertoire, and he prefers self-critiques to self-congratulations.

“We’ve been able to go into markets at the right time, execute a plan, get out with our capital partners feeling good, and then do it again,” Covarrubias said. “You could get caught up in ‘Wow, that was great.’ We’re always looking to get better.”

Growing up in East Oakland, Covarrubias saw firsthand what happens when neighborhoods are neglected and buildings slip into disrepair. A USF math major-turned-business grad who started out doing commercial financing for Union Bank, he still uses a play on finance jargon, IRR — usually meaning “Internal Rate of Return”— as an acronym for TMG’s mission of “Integrity Relationships Results.”

At times, the learning curve was sharp, like with the unwieldy master redevelopment of a former Marin City flea market site into a mix of apartments, for-sale housing, new freeway infrastructure, community assets and more during the ’80s and ’90s.

“My phrase at the end of that was, ‘I’m pretty sure I’m going to get into heaven now,’” Covarrubias said. “It had to be done with the community.”

Today, Covarrubias divides TMG’s pursuits into “four food groups” — ground-up development or rehabs of either residential or office space. In addition to projects underway in Oakland and San Jose, he’s staying busy in San Francisco with a plan to convert the former CPMC Hospital building into an “Upper-East-Side-meets-Presidio-Heights” residential development. The variety in project scope and design is intentional.

“We’re really proud of the fact that we come in with a blank sheet of paper,” he said.

Ned Spieker, a longtime TMG board member, met Covarrubias when he was a young banker. Since then, Spieker has seen Covarrubias become “one of the most successful real estate investors of this era”— so much so that he’s “built bigger and better versions” of several of Spieker’s former commercial projects in Silicon Valley. Take a one-story Clyde Avenue office complex in Mountain View, just off the 101 freeway, which Spieker leased to General Electric some 40 years earlier.

“I drove by one day on the freeway, and they were leveled,” Spieker said of the property, which TMG demolished, rebuilt and leased to Samsung in 2015. “Now there’s a 7-story building there.”

For much of Covarrubias’ career, he’s also been focused on a fundamental quandary: how to address the side effects of skyrocketing land values and a series of development booms that have been very good to companies like his.

“This region has gotten a little out of control,” said Covarrubias, a board chair for regional development groups including the Bay Area Council and the Urban Land Institute. “Bridges are falling down. When it’s not sustainable is probably getting close. People are leaving.”

Last year, at TMG’s 33-and-a-third party celebrating a third-of-a-century in business, Covarrubias chose a theme that he thinks will guide both the firm’s and the Bay Area’s futures: the rise of a “megaregion” no longer confined to traditional population hubs like San Francisco. Since 2015, TMG has expanded in Oakland with office overhauls and a proposed downtown tower, plus a 1.1 million-square-foot joint venture near San Jose’s Diridon Station and a proposed South Bay campus for Google. TMG just hired Ben Kochalski to head up a new Silicon Valley office.

“He lives in a world of common sense,” Wunderman said, “and we’re in a society that doesn’t rely on that too much.”

While TMG’s hallmark deals in San Francisco have been rehabs of existing buildings, like the recession-era revamp of 680 Folsom, Covarrubias also sees longer-term opportunity in Fremont and exurbs like Stockton and Tracy.

Decades of doing the legwork on towers, public markets, housing complexes and office buildings has really come full circle in the last few years for Covarrubias, during his time co-chairing the Metropolitan Transportation Commission’s “Committee to House the Bay Area,” or CASA.

After technical meetings, community forums and contentious public hearings, Covarrubias said the group had to appeal to “enlightened self-interest” to get developers, unions, tech companies, activists and other stakeholders aligned on 10 housing policy pillars now being deliberated in Sacramento.

Even after the Herculean efforts required on housing, Covarrubias says he has no plans to slow down. For now, there’s too much work to do on both TMG’s next wave of megaprojects and the Bay Area’s most vexing challenges.

“We’re a long way from any of this being done,” he said.

See the article at bizjournals.com