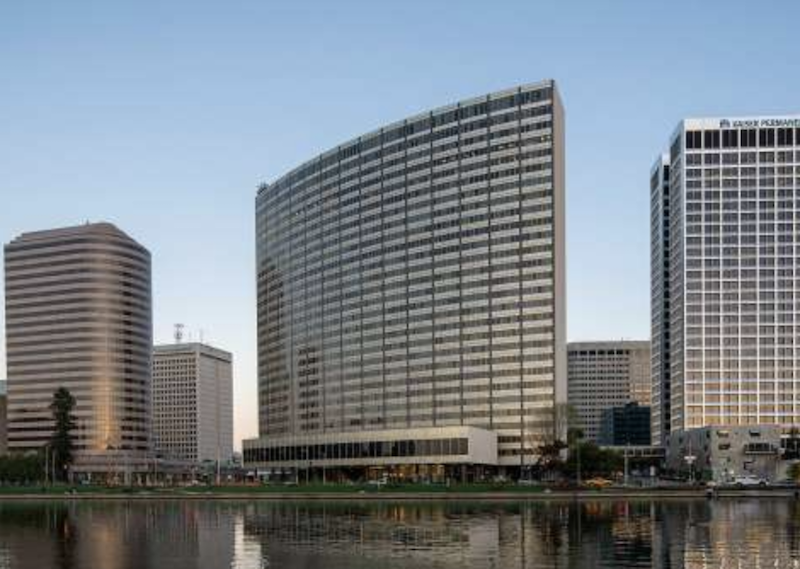 Utility company Pacific Gas & Electric will end a century-plus run in San Francisco by moving across the Bay to Oakland.

The creditor-plagued utility said this week that it will relocate to be closer to most of its employees and sell its current headquarters as part of a cost-cutting plan amid its bankruptcy case. PG&E filed for bankruptcy in January 2019, facing billions of dollars worth of claims for damages following two years of catastrophic wildfires that have sometimes been linked to its equipment, and is looking to fund a bankruptcy exit by the end of this month.

As part of that effort, PG&E said Monday that it will enter into a lease with purchase option for Oakland's 300 Lakeside Drive with developer TMG Partners. PG&E said it plans to launch a competitive market process to sell its current downtown office complex at S.F.'s 77 Beale St. and 245 Market St. The move coincides with an unspecified but likely sizable investment in Oakland by TMG, a prolific Bay Area developer. TMG declined to comment.

The San Francisco-based company is under contract to purchase PG&E's upcoming home from current owners Swig Co. and Rockpoint Group. Formerly known as the  Kaiser Center, the property includes a 28-story tower with about 902K SF rentable SF to be leased by PG&E. The utility company's triple-net lease agreement calls for a base rent of $57 per SF rising 3% each year of the 34-year, 11-month life of the lease, according to a Securities and Exchange Commission filing. It also gives PG&E an option to purchase the property for $892M in 2023, according to the SEC filing.

The move by PG&E is subject to court approval in addition to TMG's finalized purchase of the Oakland property, which is adjacent to Lake Merritt. PG&E's Oakland lease is scheduled to start at the beginning of 2022, which is when it said it will begin its relocation. It represents the biggest example of the utility company now looking to reshuffle its commercial real estate footprint.

PG&E plans on consolidating operations at separate East Bay satellite offices, San Ramon's 3401 Crow Canyon Road and Concord's 1850 Gateway Blvd. into its new Oakland headquarters starting in 2025, it said. A building the size of PG&E's soon-to-be new headquarters could accommodate up to 4,000 PG&E employees, the Mercury News reports. How many jobs it will actually end up holding is unclear.

The utility company said in its announcement its new offices will be designed as a "modern workspace" with a "flexible layout that promotes workforce health and safety in light of COVID-19." Some CRE experts said that the same amount of office space means fewer jobs in an era of decreased densities.

"Our new Oakland headquarters will be significantly more cost-effective, is better suited to the needs of our business, and is a critical part of fulfilling our commitment to operate in a fiscally responsible way that will enable us to achieve our operational and safety goals," incoming PG&E interim CEO Bill Smith said in a statement.

The announcement also comes as PG&E readies for the beginning of another fire season. Its fire-prevention decisions last year to shut off power for wide swaths of the state thrust millions of Californians and thousands of businesses into uncharted territory. Its move to Oakland follows other companies that have left S.F. for the East Bay hub in recent years, including Blue Shield of California, which moved last year after 80 years of calling S.F. its headquarters.

PG&E's move will be seen as a bright spot for many in Oakland. Since the onset of the coronavirus pandemic and economic slowdown, the city has taken a couple of big hits. Kaiser Permanente recently said it was canceling plans for a new $900M headquarters in the city and a $405M deal for Uptown Station fell through.  “We are thrilled to hear that PG&E will be joining us here in Oakland," East Oakland Youth Development Center CEO Regina Jackson said in a statement. "We need strong corporate partners to help advance our mission, and we have every confidence PG&E will continue to do just that as a member of our community."

Following recent renovations like elevator modernization and new common areas, TMG will proceed with new upgrades of the building for PG&E, the developer said.  PG&E Utility CEO and President Andy Vesey called Oakland a "thriving hub of industry and innovation" and a "perfect fit" in a statement on the company's relocation.

"We are also proud of our history in San Francisco, where PG&E has been headquartered for 115 years, and we will continue to serve our customers in this great city," Vesey said. "We expect the sale of our San Francisco headquarters will unlock value in a notoriously tight real estate market, no doubt bringing a dynamic new tenant to downtown.”