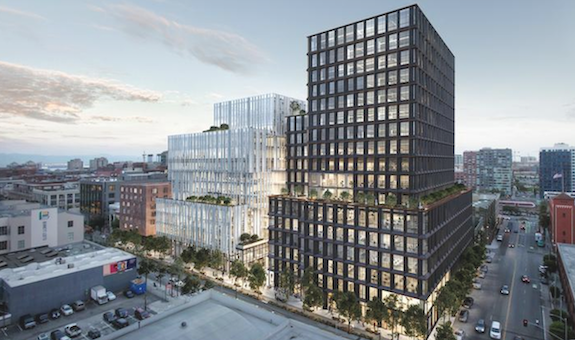 The deal is the biggest commercial lease so far this year, and the biggest in San Francisco since Facebook signed a 755,900-square-foot lease in May for the entirety of Park Tower. It's the second time in recent months that a major tech company has signed a lease for a building that is not yet approved. Salesforce in November pre-leased 325,000 square feet at 550 Howard St., which is slated to be the last major skyscraper to rise in the Transbay district. The leases show that tech companies are so hungry for space that they are willing to do deals well ahead of construction starting on a project.

Developers Alexandria Real Estate Equities, Inc. (NYSE:  ARE) and TMG Partners are developing 88 Bluxome St., which will include about 1 million square feet of office space when it's completed.

With this lease signed, Pinterest will serve as the campus' anchor tenant. The company runs a web and mobile site that people use to share information and images, such as recipes and clothing. Pinterest employs over 1,600 people, the company said in a statement.

88 Bluxome is a redevelopment of the San Francisco Tennis Club and has been in the works for several years, with a land deal that closed in 2017 for $140 million. The developers overcame significant opposition from the local community before their plans went ahead, and the development still isn't obstacle-free: the Central SoMa plan, of which the building is part, now faces a lawsuit. Once that is resolved, the project will need approvals.

“This project had three levels of complexity. You had a major rezoning effort in the Central Soma Plan. Second, the office allocation from Prop. M would need to be secured prior to developing. Third, the property was a functional tennis club," said Mike Taquino, executive vice president at CBRE who worked on the land deal, in 2018.

Pinterest filed paperwork in preparation to go public back in February, planning to list this upcoming June.

CEO Ben Silbermann, along with Evan Sharp and Paul Sciarra, founded the company in 2010.