Public Market Emeryville Remodel Pays Homage to its Industrial Past 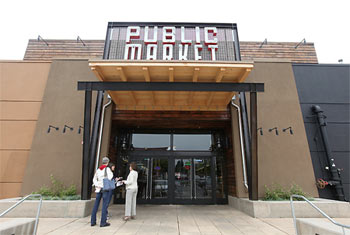 Old-growth redwood planks, light fixtures and concrete rubble bound for the scrap heap have gotten a new lease on life as part of a green remodeling effort at the Public Market Emeryville.

The improvements made to the market's food court, located in a high-ceiling industrial building put up in the 1870s, marks the first phase of an ambitious $209 million green building project envisioned for the entire 14-acre mixed-use site on Shellmound Street along Interstate 580 near the Ikea store.

Electric-vehicle charging stations, a solar carport, water-saving landscaping and an herb garden will be finished by year's end as part of the improvements being made to Public Market. Groundbreaking on a 190-unit, five-story apartment building is expected to start in May and be finished by March 2014.

A Guitar Center opened in February after moving from a previous location in El Cerrito. Construction workers are putting the finishing touches at an Urban Outfitters that will open in June. Both are located in the space where the Borders bookstore stood.

The entire project is the first of its kind in the country to achieve a platinum community designation from the U.S. Green Building Council's Leadership in Energy and Environmental Design for Neighborhood Development.

Not only will the buildings have energy- and water-efficient features, but the project will be pedestrian- and bike-friendly, close to public transit and provide a diverse mix of housing, said Aaron Welch, co-chairman of the sustainable neighborhoods committee of the Green Building Council's Northern California chapter and a senior planner at Raimi + Associates, a Berkeley-based urban planning firm.

"They (owners TMG Partners and Rockwood Capital) are committed to a very high standard of integrating with the surrounding neighborhood and being connected to it and providing services to the residents and businesses around them," Welch said.

Remodeling work on the Public Market's food court, which first opened in 1988 and houses more than 20 ethnic eating establishments, was finished about a month ago.

Rolland Mo, owner and general manager of Crispy Fry Chinese Cuisine, likes the new look. "It looks like a family room, and more people enjoy that," he said.

The brick-and-timber industrial building was previously used as a stockyard, asphalt roof company and truck terminal before it was transformed into a food court. But the initial remodeling project covered up the building's industrial look, which is now being restored.

"What we really want to do is reclaim the industrial heritage of the site and upgrade the property to attract new tenants," said Denise Pinkston, project manager and partner at TMG Partners. "Since we are gearing up to build a new green neighborhood in Emeryville, we wanted to start by making our property management and our tenant improvements remodeling green."

To that end, the ceiling of the food hall was opened up and painted a uniform gray to better expose the building's industrial structure. Lights from the Borders bookstore now hang from the ceiling. The old-growth redwood seen along some of the wall space was salvaged from an old printing plant in San Francisco's Mission district before it was torn down to make room for a large apartment complex that TMG Partners is building there. Wood slats taken from the Market Hall in Hercules are also used in the food court to hang art made by local artists. Concrete rubble is being used to help build planting beds, benches and a retaining wall.

The redwood planks salvaged from the old printing plant are even used in the fancy new trash cans that feature separate bins for compost, recycling and trash.

A major overhaul of the 14-acre property includes renovation and construction of 1.25 million square feet of office, retail and residential space over 20 years. The 260,000 square-feet Public Market is best-known for its international food court, but also includes retail and office space and a movie theater.