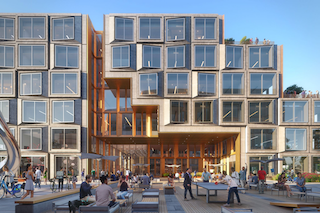 Silicon Valley Business Journal
San Jose approves 1 million-square-foot office development near Diridon Station, future Google campus
by Janice Bitters
One of the largest proposed projects in downtown San Jose has gotten its final approval from city officials. The entitlements come as the two Bay Area developers behind the project start branding the future corporate campus and prepare to dig in on construction.

San Francisco-based TMG Partners and San Jose-based Valley Oak Partners are slated to start construction next year on a three-building development that would add up to about 1 million square feet of new development at 440 West Julian St. It's a project they’ve newly named Platform 16, which they say they will open tenants sometime in 2021.

San Jose Mayor Sam Liccardo praised the investment by the two developers in a statement on Monday: “This planned development will help bring thousands of jobs into our city center with easy access to public transit,” he said, adding that the development also includes “a number of public space improvements that will help connect the Guadalupe River Park to Platform 16 and the rest of the Diridon Station area.”

Indeed, many developers in and around downtown San Jose are focusing in on the city’s largest transit hub, known as Diridon Station, because it sits smack-dab in the middle of where Alphabet Inc.-owned Google and its Texas-based development partner, Trammell Crow, have been eagerly scooping up real estate. The two giants are planning a potential mixed-use campus where up to 20,000 Google employees could eventually work among retail-lined streets bisected by an “eco-walk” and new residential units.

So far, thousands of new residential units and millions of square feet of office space has been proposed in the city's downtown and around the Diridon Station area.

“The area around Diridon Station is poised to become our megaregion’s next major innovation hub,” TMG Chairman and CEO Michael Covarrubias said in a statement Monday. “Platform 16 is well-aligned with the Diridon Station Area Plan’s bold framework to integrate open space, transportation, and development to meet the evolving needs of the region’s technology and business community and its employees.”

Last year, the San Jose City Council voted to approve a rezoning of TMG and Valley Oak's property from industrial to what the city calls “Transit Employment Center,” zoning, which allows for office and higher-density development. Now that it is approved to move ahead, the three-building development would replace a slew of industrial structures and parking spaces on a nearly 5.5-acre site bounded by Autumn Parkway, North Autumn and West Julian streets.

When the project is complete, the property will instead be filled with a set of six-story, modular-looking office buildings, each with large windows and tan, wooden-looking finishes on the outside. Renderings show upper floor setbacks turned to patio space outfitted with plants and trees.

City plans show that the development group is looking to consolidate the more than two dozen parcels on the site into four — including one for each building. The site would also include four levels of underground parking with about 2,264 parking spots, which would come with its own condominium map, meaning the parking could be split up and sold separately, if desired down the road.

A source familiar with the plans said earlier this year that the group didn’t yet have a general contractor locked in place, but plans submitted to the city in December name Milpitas-based Devcon Construction Inc. as the pre-construction contractor. Those plans also name San Francisco-based The Guzzardo Partnership as the landscape architect.

“Large technology companies today realize the importance of their space to attract talent and retain employees,” Schmidt said in a statement Monday. “Platform 16’s unique architecture, with its exceptionally tall ceiling heights, expansive floorplates, and multiple outdoor terraces, brings a level of design to San Jose not seen before, providing an opportunity for companies to create a workplace that sets them apart from the competition.”
Back to top