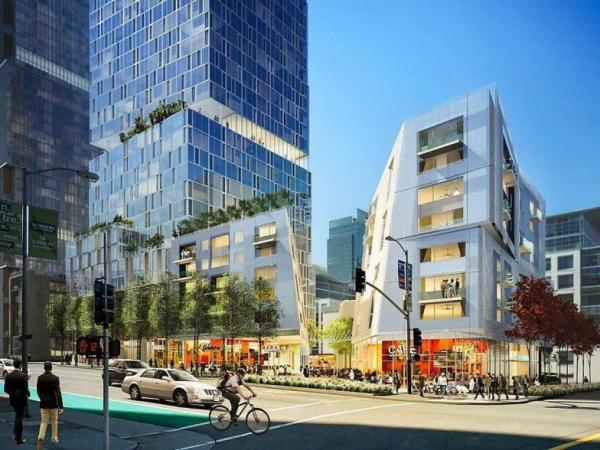 Now a construction staging area, the block at First and Folsom streets is slated for new residential buildings including a 550-foot tower.

Three Pritzker Prize-winning architects and two with cult appeal are designing buildings that would climb as high as 850 feet. Four have arrived on the scene in the past six months.

"The starchitects have arrived; no question," said John Rahaim, the city's planning director. "They can bring excitement and a certain amount of experimentation that is welcome. The challenge is whether the buildings they propose work in the city, or if they're not anything more than stand-alone concepts to look at."This isn't the first time that the Bay Area has attracted such figures, especially during a hot economy. But they haven't before descended in such numbers - evidence both of San Francisco's current cachet and of the global allure of branding of all sorts.

The high-profile procession includes England's Lord Norman Foster, whose Foster + Partners is the lead designer for a project at First and Mission streets that could match the Transamerica Pyramid in height. The firm OMA, led by Rem Koolhaas, is the leading contender to design a 50-story tower two blocks to the south at Folsom Street. Both Koolhaas and Foster have received the Pritzker Architecture Prize, the profession's most prestigious honor.

Farther east on Folsom, one block from the Embarcadero, a tower is being crafted by Chicago's Jeanne Gang, whose 82-story Aqua in that city is one of the most acclaimed high-rises of the past decade. On the long-forlorn 900 block of Market Street, the Danish firm BIG is at work on a mixed-use complex with the slashing forms for which founder Bjarke Ingels is known.

The fifth celebrity architect is another Pritzker winner, Richard Meier, designer of Getty Center in Los Angeles. His firm has worked off and on since 2008 on a 34-story residential tower proposed for Van Ness Avenue and Market Street.

Only Meier's plan has been fleshed out in detail, and the projects associated with Foster and Gang are so new that the details of the initial proposals haven't been released. Based on the evidence at hand, what the quintet shares is a contemporary sensibility that goes beyond the interchangeable glass forms sprouting on skylines here and elsewhere.

The most provocative - and in some ways problematic - is the mix of housing, a hotel and arts spaces at 950-974 Market St. conceived by Ingels for developer Group I.

With a pair of angled folding towers of roughly 18 and 16 stories, the first batch of designs released in February by Group I radiates the brash vibe that has made Ingels, a relatively young 39, a controversial newcomer on the international architectural scene.

The east edge is a triangular prow that slices above a small plaza and jabs toward the Ferry Building. Windows puncture the walls in asymmetrical patterns. The blunt towers lean away from each other to allow a funnel-shaped space in the center of the block, where there will be a shared atrium for the different activities.

It's an arresting concept. It's also an attention-seeking counterpart to the more traditional, broad buildings along Market, presenting instead jagged walls that loom above the Tenderloin along Turk Street.

While Group I officials stress that the details are sure to change as the project goes through city reviews, firm President Joy Ou said last week that BIG's visual flair - Ingels has described his work as a quest for "hedonistic sustainability" - is a part of the allure: "It's good to shift people's minds a bit. That's how an interesting city comes about."

If BIG plays up the flash, the initial OMA design for the block at the northeast corner of First and Folsom streets sets a tone of crisp elegance.

The city-owned lot is being sold to raise funds for construction of the Transbay Transit Center, and developers were asked to submit bids earlier this year for a project with low buildings around a tapered tower of up to 550 feet. The block must include substantial amounts of housing for low- and middle-income residents, as well as market-rate housing.

Three developers competed; the review panel has recommended the selection of Related California. Related's $72 million bid topped its rivals', but the jury also stressed its preference for the design concept by OMA, where the tower's northeast edge is softened by notched setbacks that seem to spill downward. At the base, a la Ingels' approach on Market Street, there's a busy central courtyard (here an outdoor "paseo") with walls that lean back to let in sun.

"Having a fresh look and fresh ideas is viewed positively," said William Witte, president of Related California. "We had to be (financially) efficient. We also wanted to be different."

Foster + Partners is working on a 600-foot tower on Mission Street and an 850-foot tower on First Street, leaving room in between for three existing buildings at the corner. The idea is to begin the lower floors of the First Street tower as much as 70 feet above ground level, allowing the current network of alleys to remain in at least a symbolic form.

"There aren't many people who do 850-foot buildings - that's what got us thinking world-class," said Matt Field, the managing director of TMG Partners, which is developing the First and Mission sites.

As for Gang's possible tower, on Folsom between Spear and Main streets, she and representatives of developer Tishman Speyer have met with planners, but no proposal has been filed.

It's impossible to say how many of these visions will come to pass. Koolhaas is remembered in San Francisco for an avant-garde Prada boutique near Union Square that was approved in 2001 but never built. Meier's glass-veiled tower for Market and Van Ness was moribund for years, although an environmental impact report is now expected in the summer.

Another catch is that for all the buzz around "starchitects," nobody designs a building on his or her own.

Foster is 78, with 18 senior partners and 36 partners in a firm of 15 offices on four continents: "Clearly he isn't going to be the design leader," Field said. Even so, Foster visited the site in January and is "personally interested," said Jeffrey Heller of Heller Manus Architects, the local firm collaborating with Foster + Partners.

Koolhaas, 69, is based in the Netherlands. The project at First and Folsom is being handled by OMA's New York office, which is led by Shohei Shigematsu. San Francisco's Fougeron Architecture is focused on the lower buildings surrounding the courtyard alongside which the OMA tower climbs. The team also includes CMG Landscape Architecture.

For Planning Director Rahaim, the benefits of big-name outsiders working in San Francisco outweigh the risks.

"It's healthy to experiment, and good to have buildings that push the envelope," Rahaim said. "Even where, in parts, they don't work."