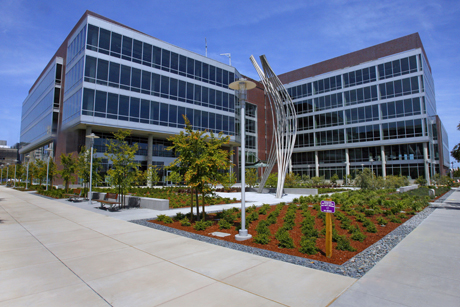 In a major NoCal acquisition, The Sobrato Organization, in partnership with TMG Partners, paid $91 mil for 500 Terry Francois, a six-story, 291k sf ($313/sf) Class A office property located on the waterfront in San Francisco's Mission Bay, within walking distance to AT&T Park. The building was sold by The Lionstone Group, out of Houston.

500 Terry Francois will be Sobrato's first acquisition in San Francisco and represents the first formal association between Sobrato, best known as a developer of facilities for high tech companies, and TMG, one of the region's largest developers of mixed-use properties.

The building was developed in 2008 by Lowe Enterprises and was acquired by CB Richard Ellis Investors, on behalf of their Strategic Partners U.S. IV fund, prior to completion. It features state-of-the-art conference rooms, a full-service 4k sf fitness facility and retail space -- all in a campus-like setting in the heart of a burgeoning new section of San Francisco south of the Financial District, an area considered the current hotbed for the biotech industry.

Commenting on the acquisition, John M. Sobrato, CEO of The Sobrato Organization, pointed out that his company believes the trend of Silicon Valley tenants wanting to have a major presence in San Francisco will continue. "That is the primary reason we wanted to expand our holdings to San Francisco."

A Colliers International team that included Frank Wheeler, along with Tim Maas, Tony Crossley and Erik Hanson represented Lionstone in the transaction. TMG will oversee the leasing, management and advisory services for the property and has retained Donnette Clarens, Mike Brown and Jack Troedson of Cornish & Carey Commercial Newmark Knight Frank to handle the marketing assignment. They tell us that 500 Terry Francois represents a rare opportunity for a single tenant to lease a large block of premium space in the city.

TMG has developed more than 18 msf of property throughout the San Francisco Bay Area, including Emeryville, Marin City, Novato, Palo Alto, San Bruno, San Jose and San Francisco. The company earlier purchased 208 Utah from Lionstone in the fourth quarter of 2010.