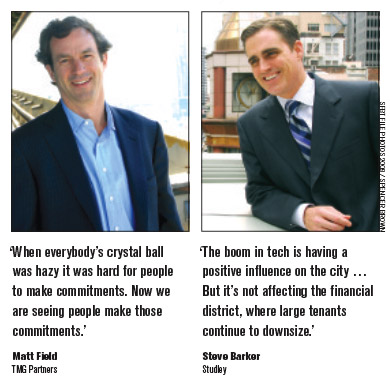 Fast-growing tech companies drove San Francisco's leasing market to its first quarter of growth since 2008, a trend that seems to be strengthening even as financial service and law firms continue to shrink operations.

The fledgling trend offers the first glimmer of hope for downtown landlords who have watched the value of their buildings plummet 30 to 50 percent as companies shed space. For tenants, it adds a sense of urgency as the likelihood increases that current bargain-basement leasing rates may not last.

Overall in the quarter, city tenants soaked up 100,000 square feet more than they shed, according to Jones Lang LaSalle. Starting in the third quarter of 2008 San Francisco had suffered through eight quarters of "negative absorption." JLL Research Director Colin Yasukochi said the 100,000 square feet was "the tip of what's to come."

"We believe that the positive momentum is going to be sustainable over the next few quarters based on deal activity that has occurred and is occurring," said Yasukochi.

Indeed, the market eked into positive territory during a week in which social gaming company Zynga announced a 270,000-square-foot lease at 650 Townsend St., space that has been largely vacant since the dot-com crash. While the Zynga deal will not show up as positive absorption until it moves into the building late next year, the seven-year commitment represents more than 100,000 square feet of growth for Zynga, which is spread out in several buildings in inner Potrero Hill. Other deals are on the horizon: Del Monte is growing by 50,000 square feet, and Salesforce by 100,000 square feet. Twitter is currently in the market for 150,000 to 200,000 square feet, more than twice what it has now. San Francisco has gained 9,000 technology jobs since 2004, not including the third quarter of this year.

Technology is the only sector experiencing growth.

"Overall, tech companies are leading the recovery," said Yasukochi. "There are other firms that are contracting but overall it's a net positive."

Even with the rosier picture, there is a long way to go. Unemployment remains over 9 percent while layoffs and downsizing have left 13.8 million square feet of vacant space in the city, a 17.6 percent vacancy rate. Companies contracting include Deloitte, which is gearing up to move to 555 Mission St., and will be downsizing by about 42 percent. Other firms giving up space recently include Chase, BlackRock, Morrison & Foerster and Capital Group.

Steve Barker, an executive vice president with the tenants rep group Studley, said he is still not convinced that the tech recovery will have much of an impact beyond the South of Market creative buildings tech firms are drawn to.

"The boom in tech is having a positive influence on the city, which is good for everybody," said Barker. "But it is not affecting the financial district, where large tenants continue to downsize."

Yasukochi said eventually the strength of tech will permeate the entire downtown ecosystem.

"The key to further improvement in the market is going to be the ancillary job creation that is going to result from tech firms growing - legal, accounting, PR, architects and engineers, and construction," said Yasukochi.

The positive trends have driven up downtown rents 2 percent, although SoMa rents have climbed 7 percent, according to JLL. The percentage growth is higher in Class B buildings than Class A buildings. Matt Field of TMG Partners, which owns 650 Townsend St., said he sees rent growth as being "market specific and building specific" rather than broadly based.

"When everybody's crystal ball was hazy it was hard for people to make commitments. Now we are seeing people make those commitments," said Field. "It doesn't look like 1999, but you can see some of the segments of the market tightening."

Field said he is seeing an uptick in large requirements in the market, even as companies like Deloitte shed square footage.

"I think we will see some of the tech companies show positive absorption, but I don't think we are done with the space shedding," said Field. "Some of this will be treading water."