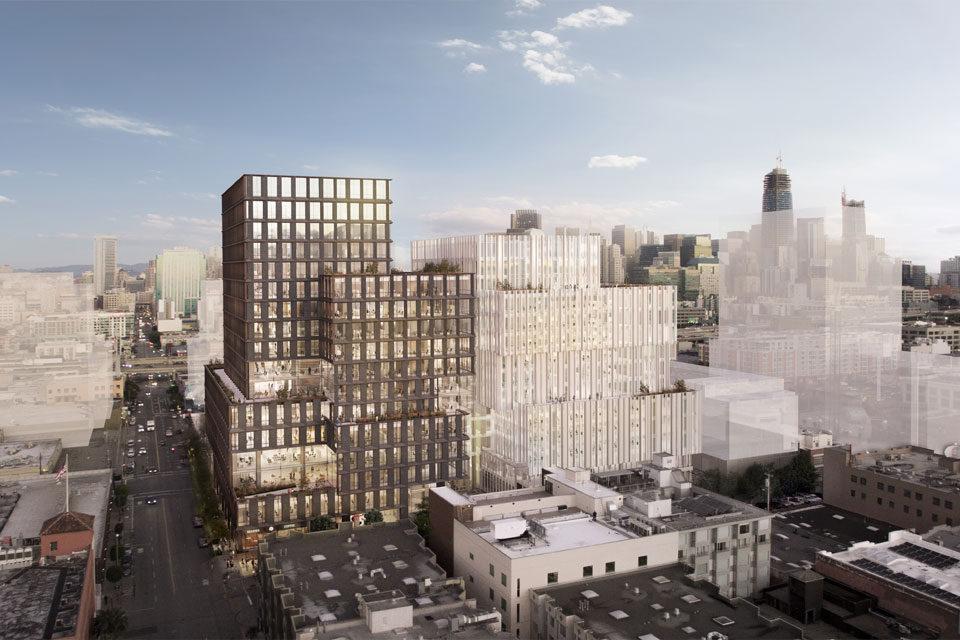 Central South of Market is in transition, moving out of its industrial past to a sustainable, transit-oriented neighborhood. Its biggest projects include Tishman Speyer's Brannan Square and 655 4th Street as well as 88 Bluxome St. by TMG Partners and Alexandria Real Estate Equities.

The city's Central SoMa Plan aims to create 32,000 jobs and 8,800 residential units, but both the current COVID-19 pandemic and the passage of Prop. E tying office development to affordable housing adds an element of uncertainty to its goals.

With all that in mind, here are three Central SoMa projects to watch:

This Tishman Speyer project serves as one of the centerpieces of the city of San Francisco’s Central SoMa plan to redevelop the area between Second and Sixth streets.

The 1.2 million-square-foot, three-building office complex slated for 598 Brannan St. was designed to accommodate nearly 5,000 workers. In addition to 1.1 million square feet of office space, the development includes 65,000 square feet of light industrial and retail space, a childcare center, open space and land donated to the city for future affordable housing.

To build the project, Tishman Speyer is partnering with Mitsui Fudosan America, the U.S. subsidiary of Japan's largest real estate company, Mitsui Fudosan Co. Ltd. The project already has allocations in place from the city’s office cap known as Prop. M. Tishman Speyer first began working on the site in 2012 and gained formal approval for Brannan Square by the city in June 2019.

Before proceeding, the project first had to wait for city staff to resolve legal action taken against its Central SoMa plan. In January 2019, several groups filed lawsuits challenging the upzoning that increased the height limit on some high-rises in the project area to 400 feet, in addition to calling for further review of the environmental impact. The city settled those lawsuits in September, allowing Brannan Square to move forward.

The project will be built in two phases. Tishman Speyer said it expects to break ground on the first phase, which includes 800,000 square feet in buildings one and two, in the second half of 2020. The aim is for tenants to move in by fall 2022. The developer said the timing for the third building will depend on tenant demand.

Another Central SoMa development in the works by Tishman Speyer is a mixed-use project that calls for 960 residential units at 655 4th St.

World-renowned architects Bjarke Ingels Group designed the two 400-foot-tall towers, which will include 25,000 square feet for a 38-room boutique hotel on top of the over 1 million square feet for the 960 units. The residences will consist of a mix of studios, 1-bedroom, two-bedroom and three-bedroom apartments. The project will also bring more than 20,000 square feet of coworking office space, 18,000 square feet of ground-floor retail and additional space for retail and public plazas. It’s close to a new central subway stop and train stations for commuters.

Tishman Speyer started working on the project in 2013. Initially, it was intended to be commercial, but changed course to become residential after the developer received community input. It earned approval from the city’s planning commission in June 2019.

The project replaces the Creamery neighborhood cafe, Iron Cactus taqueria, HD Buttercup designer furnishing store and a catering service — all of which are set to be demolished. Both HD Buttercup’s CEO and the Creamery’s owner wrote letters in support of the project, with the Creamery planning to return to the new site.

Instead of including affordable units in the project, Tishman Speyer will pay an in-lieu fee, which the Mayor’s Office of Housing and Community Development will use to build affordable housing at other sites in Central SoMa. Tishman Speyer said it is working toward groundbreaking for 655 4th St. later in 2020.

The future home of Pinterest's headquarters, 88 Bluxome St. is a 1.07 million-square-foot building just a block from the San Francisco Caltrain station. The building is being developed by TMG Partners and Alexandria Real Estate Equities. Alexandria bought the building in 2016 and signed Pinterest onto a lease in May 2019. The site was long home to the San Francisco Tennis Club, a facility that is now the Bay Club and is in a temporary location until the new building is complete.

The plan is to build two high-rise office buildings over ground-floor retail. Below ground will be 12 indoor tennis courts to replace the San Francisco Tennis Club, along with indoor swimming pools and recreation center for the San Francisco Recreation and Parks Department. The project also includes a dedicated parcel for approximately 100 units of affordable housing left to the Mayor’s Office of Housing and Community Development.

When the building was approved by the San Francisco planning department in July 2019, it was included as a part of the Proposition M allocation, a law passed in 1986 which allows only up to 925,000 sq. feet of office space to be built per year in San Francisco. The approval was one of the last approved deals before the city passed Proposition E, a measure that requires the city to match the percentage of the proposed affordable housing development to the percentage of proposed office space development. Prop. E was intended to equalize the ratio of affordable housing to office space construction, but instead could make 88 Bluxome one of the last large headquarters to be built in San Francisco.

Currently the building’s anchor tenants are Pinterest, who had the lease approved just months after going public and the Bay Club. TMG Partners and Alexandria Real Estate Equities hope to break ground on the project in 2020, but have not yet set a date.