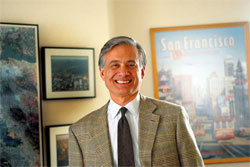 In the sizzling world of South of Market real estate, all roads these days lead to TMG Partners.

Over the past month the San Francisco-based developer has awoken from a recession-induced coma with a roar, taking control of nearly 1 million square feet of SoMa real estate. In the past two weeks alone TMG signed a 270,000-square-foot lease with social gaming company Zynga at 650 Townsend St. - the largest in the city in five years - and took ownership stakes in two of the city's most notable empty buildings, the 405,000-square-foot 680 Folsom St. and the 400,000-square-foot 155 Fifth St. TMG also bought 208 Utah St. for about $7.5 million, or $100 a square foot, a brick-and-timber building that recently lost one of its largest tenants, Trulia.

At TMG's offices at 100 Bush St. there is a tradition of ringing a bell each time a major transaction is landed. After a few years of silence, the bell has been ringing a lot lately.

"We had a pretty interesting summer," said Covarrubias. "And there is clearly more to come."

The deals put TMG in a position to pull another Zynga with several other large tenants scouring the market for new headquarters, including Twitter, Dolby, Salesforce and the Dugoni School of Dentistry University of the Pacific, said Michael Covarrubias, the CEO of TMG Partners.

"There are a bunch of large users out there, which is causing a tidal wave of activity," said Covarrubias. "The activity is tremendous."

The most intriguing opportunity for TMG may be 155 Fifth St. Last summer, Continental Development Co. retained TMG to help reposition the building, which Wells Fargo vacated at the end of June.

TMG said this week that it had taken an ownership stake in the building and is evaluating options - looking at everything from residential to office to retail. But the firm is focused most intently on luring a large technology company. Twitter reportedly has 155 Fifth

on a shortlist of options.

"Of all the buildings around town it has the greatest central location for transportation," said Covarrubias. "You can see it's in the path of progress. You get a clean palate. You can start from the shell and make it into the building you want."

Continental senior vice president Alex Rose said, "It is a dynamic partnership to be in a venture with TMG here in the Bay Area, and especially South of Market where they are the leaders."

At 680 Folsom, TMG this week announced a joint venture with Rockwood Capital to buy the property, after the previous owners, RREEF and CalPERS, decided they were not interested in going forward with the project. The former SBC headquarters facility is entitled for an upgraded office building, designed by Skidmore Owings & Merrill, and expansion of 100,000 square feet up to 505,000 total.

Concurrently, the San Francisco Visitors and Convention Bureau has been seeking an expansion space for Moscone Center. TMG, in turn, has been in discussions with the city for several months to see if 680 Folsom could accommodate what has become known as "Moscone East."

Covarrubias said they remain committed to the Moscone expansion - but only within reason.

"We are happy to go along - we want the win-win with the convention center," said Covarrubias. "But if we can't see a clear path to making that happen, with the market heating up, we may have to go in another direction which is office use or even conversion (to housing)."

In addition to the four SoMa office properties, TMG is working with AGI Capital to develop two nearby housing projects, 260 Fifth St. and 900 Folsom St., which were entitled earlier this year for a combined 414 units.

For the Pacific School of Dentistry, which is looking for both a new campus and housing for students, TMG's mix of residential and commercial SoMa properties could offer a solution. Daniel Cressman of Grubb & Ellis, who is representing the dentistry school, said it was too early to discuss the search, but that TMG could play an important role.

"(TMG) has always been in the mix, but they have geared up in a big way," said Cressman. "It gives them one more opportunity to secure one of the tenants. It's a slow-motion game of musical chairs, and they kind of have their name on all the chairs."

TMG's expansion in SoMa comes as potential demand from technology companies increased 6 percent from the second quarter and is 60 percent higher than in the fourth quarter of 2009, according to CB Richard Ellis. Over 84 tech tenants, totaling 1.7 million square feet of demand, are currently looking for space. To land Zynga, TMG had to relocate "four or five" tenants within the building.

"I think the market has grown up. The companies we are looking at are being run by more experienced, mature managers. The capital is in place, or committed to being in place, and in some cases, like Zynga, they are making a lot of money," said Covarrubias. "These are not your dot-com flukes."

Covarrubias said he has always looked at New York and downtown Palo Alto as anomalies, markets that serve such a unique role in the national economic ecosystem that they are somewhat immune to broader market trends.

"Now I think you can add SoMa to that list," he said. "I think it has a life force now."