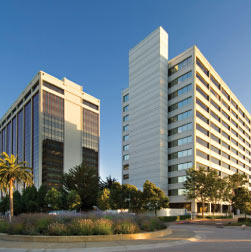 TMG Partners has been named by Alameda County Superior Court as the receiver for three Emeryville buildings owned by a subsidiary of Houston-based Hines Interests.

The subsidiary, NOP Watergate, defaulted on a $152 million loan from Pacific National Bank for the buildings, which total more than 814,000 square feet and are part of the Watergate office tower complex. Pacific National filed the notice of default on July 15.

"We are very excited," said Michael Covarrubias, chairman and CEO of TMG Partners, in a statement. "We look forward to employing the strength of our Bay Area-wide experience in leasing, asset management and maximizing value to make this assignment a success for the bank."

As receiver, TMG will manage the assets, but not take title to them, during the property's default period, which runs around four months. TMG's compensation will be determined by the court.

The purpose of a receiver is to preserve the value of an asset during court proceedings, said Karl Geier, a real estate attorney with Miller Star Regalia in Walnut Creek. Typically, the lender wants to take the property out of the borrower's control. Having a receiver also helps a bank or lender protect itself from lawsuits while a property is in default.

Appointing a receiver is common in commercial mortgage defaults, Geier said, and has become a growing source of business for property managers thanks to the increase in properties going back to lenders.

The Watergate office tower complex includes a fourth building also owned by Hines that is not in default. That building is 100 percent leased to Oracle and Novartis.

Hines and its investor partners also defaulted on two other Bay Area properties, 333 Bush St. in San Francisco, on which Brookfield Real Estate Finance and Munich Hypo Bank were the lenders, and Marin Commons, a 455,000-square-foot office complex in San Rafael.