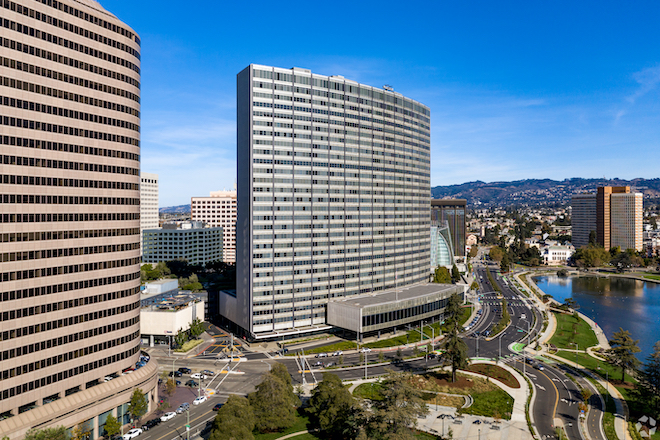 San Francisco developer TMG Partners announced Friday that it has closed on the building that will become PG&E's new Oakland headquarters at 300 Lakeside Drive.

The price was not disclosed. The sellers, Swig Co. and Rockpoint Group, will become investors in the new TMG ownership entity, the company said in a statement. Swig acquired the property in 2005 and formed a joint venture with Rockpoint to recapitalize it in 2015.

Swig and Rockpoint Group put the building on the market late last year, and TMG acknowledged it had the building under contract in June when PG&E announced it planned to vacate its San Francisco headquarters of more than a century to relocate to Oakland by 2023.

The utility company will lease 600,000 square feet of vacant space at 300 Lakeside — which, at 975,000 square feet, is Oakland's largest office project — and eventually occupy the entire building as existing leases expire. The current tenants are BART and the University of California Office of the President, which plan to relocate to other buildings in Oakland.

PG&E's long-term lease at 300 Lakeside also includes an option to buy the building from TMG in 2023 for $892 million. The company has hired CBRE to market its San Francisco headquarters, 77 Beale St. and 245 Market St., for sale.

Oakland Mayor Libby Schaaf said in a statement on Friday said that the acquisition is "good news for the vitality downtown Oakland" as the city begins its recovery from the economic downturn induced by the Covid-19 pandemic.

"We welcome PG&E and their employees to our community and look forward to sharing our Oakland values with our new neighbors," Schaaf said in a statement. "We also look forward to working with TMG Partners as they realize the long-term potential of the property as this significant transaction illustrates Oakland's continued central role in the broader Bay Area economy."

"This was a very complicated transaction executed in a time of unprecedented economic disruption involving a headquarters lease and purchase option, a complex joint venture with the seller, a significant scope of building renovation and a large-scale financing," Fields said.

Developed in 1960 as the headquarters for Kaiser Industries, 300 Lakeside will be subject to renovations by TMG, including a seismic upgrade, facade cleaning and significant upgrades to its mechanical plant and fire and life safety systems, TMG said in its statement. Gensler has been hired as the architect for the project, MKA as the structural engineer and Plant Construction as the general contractor.

The property comes with a 1,330-stall parking garage with a rooftop garden and a two-story building with some 130,000 square feet of retail and office space that were not part of the deal with PG&E. TMG said it will retain ownership of the garage and office building at 344 Thomas L. Berkeley Way, which together are entitled for a 1.4 million-square-foot office or residential development. The firm said that it will finalize its development plans for the buildings after it completes the buildout of 300 Lakeside and then market the properties for lease.