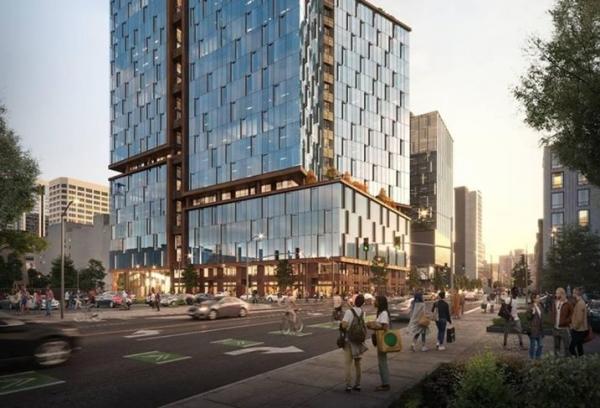 TMG Partners is putting space in an unbuilt office tower in Oakland on the market for lease.

The building, known as Telegraph Tower, will contain 875,000 square feet at the corner of Telegraph and West Grand avenues in Oakland’s thriving Uptown neighborhood. Construction is slated to start by the middle of next year.

TMG is seeking a single tenant. The developer received some inquiries from potential tenants after it started planning the tower two years ago. Meanwhile, San Francisco is experiencing low vacancy, rising rents and a dearth of new office development, said David Cropper, a partner at TMG.

“Oakland used to be just cheaper than San Francisco and close to transit,” he said. “Technology companies are coming to Oakland — not just back office tenants. Tech tenants are finding Oakland is a desirable, vibrant place to be.”

San Francisco-based TMG is one of the Bay Area’s most prolific developers with a track record of more than 30 million square feet of property throughout the Bay Area.

The developer, however, had stayed out of Oakland until 2015 when it bought 1330 Broadway for $80 million. The investor spent $30 million to revamp the tower and lease it up to new tenants such as Oracle and Arup, then sold it in 2018 for $173 million.

In 2016, TMG Partners bought the 198,000 square-foot 2201 Broadway for $65 million, or about $328 per square foot, and began a $14 million revamp of the former furniture-store-turned-office building. Last fall, co-working operator WeWork leased 68,000 square feet on three floors.

TMG wants to extend its success in bringing in tenants to the new tower, but at a much larger scale such as bringing a single tenant to fill up Telegraph Tower, Cropper said.

“We took every lesson we have learned about what companies want today and designed Telegraph Tower as a workplace environment that is entirely focused on delivering the ‘right’ employee experience,” he said.

The building will replace a surface parking and gas station near the intersection of Grand and Broadway adjacent to Luka’s Taproom and about three blocks from the 19th St. BART Station.

Well-known San Francisco brokers, Chris Roeder of JLL and J.D. Lumpkin of Cushman & Wakefield, agreed to team up to handle the leasing efforts.

The marketing comes at a time when most of Oakland’s large spaces and new office buildings are leasing up. The only major space available in a new building is 300,000 square feet in Shorenstein’s 601 City Center. That building was recently completed and is welcoming its first occupants, employees of Blue Shield.

In June, Kaiser Permanente said it would gobble up all of Eastline, a $900 million, 1.6 million-square-foot office development a block from Telegraph Tower that also hasn't broken ground yet.

Office vacancy in Oakland shot up to 16.2 percent during the third quarter with about 900,000 square feet of available space on the market, according to commercial brokerage firm Cushman & Wakefield. Meanwhile, Class A asking rents hovered near $59 per square foot — about 50 percent less than the average asking rate of $89 per square foot in San Francisco.