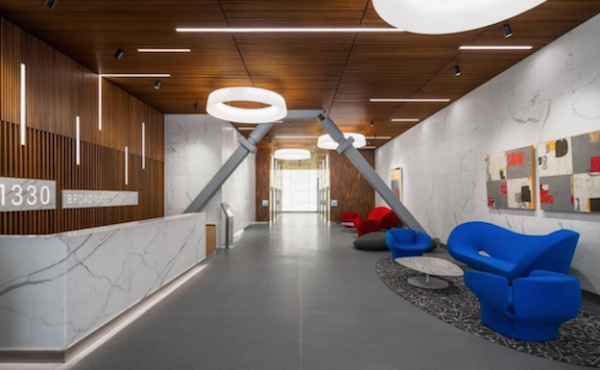 Terms of the deal were not disclosed, but a source familiar with the 315,000-square-foot building said the price was roughly $173.25 million or $550 per square foot — more than double what the seller paid.

The seller, TMG Partners, bought the building in 2015 for $80 million or $254 per square foot and spent more than $30 million to give the tower new life with a renovated lobby, building systems and slew of new tenants including Oracle and Arup. The building was San Francisco-based TMG’s first investment in Oakland.

“The redevelopment of this urban infill, transit-oriented building has only strengthened our commitment to Oakland,” said TMG chairman and CEO Michael Covarrubias.

The company has agreed to stay on to manage the property for KKR. The building is KKR’s second big investment in Oakland after teaming up with Harvest Properties last year to buy the 277,888-square-foot 180 Grand for $119.25 million. KKR has about $176 billion in assets under management worldwide.

“We believe Oakland has attractive long-term secular growth trends driven by its accessibility to transit, a growing retail amenity base, and a meaningful amount of residential development,” said Justin Pattner, head of real estate equity in the Americas at KKR. “TMG has successfully repositioned the property into a top building in Oakland, and we look forward to the next phase of the leasing business plan.”

Built in 1958, 1330 Broadway is considered a prime example of the International Style of architecture, known for its simple design, lack of ornamentation and use of glass, concrete and steel.

When TMG bought it, however, the building was in need of a make over, said John Dolby, a broker with Cushman & Wakefield who handles leasing for 1330 Broadway.

“Because of all the transformation, the building attracted high-quality tenants that four years or so would not have been attracted to Oakland,” Dolby said.

TMG, a long-time Bay Area investor and developer, had passed on Oakland for decades until buying 1330 Broadway. Since then, the company snapped up 2201 Broadway for $65 million and is working on a $14 million overhaul as well as seeking to entitle a new office tower on an adjacent site.

Oakland office properties have becoming increasingly attractive to institutional investors such as KKR, Goldman Sachs and KBS Capital Advisors. During the past decade, the city’s office rents have skyrocketed while vacancy plummeted making it one of tightest urban markets in the country, according to CBRE.

KKR “appreciates (1330 Broadway’s) amenities, direct transit access, and all of the shops, cafes, restaurants and other amenities that Downtown Oakland has to offer,” said TMG Director of Development David Cropper.

More office sale deals in Oakland could be in the works now that CIM Group, the city’s largest office landlord, is looking to unload a five-building portfolio.