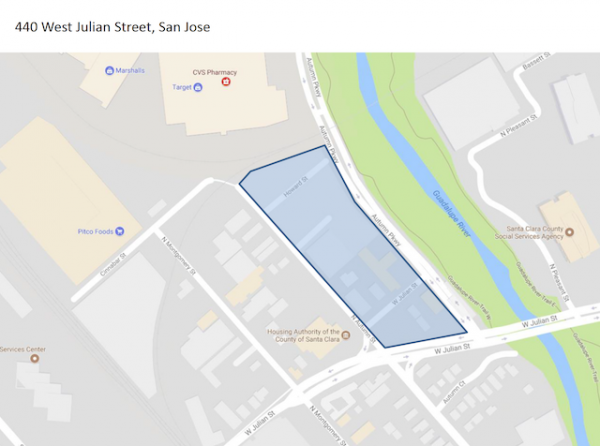 SAN JOSE, Calif. (June 26, 2017) – TMG-VOP Julian, LLC, a joint venture between TMG Partners of San Francisco and Valley Oak Partners, LLC of San Jose, submitted late last week a Preliminary Review Submittal Application to the City of San Jose to develop close to one million square feet of commercial office near the Diridon Station in Downtown San Jose. The site, identified as 440 West Julian Street, is comprised of approximately 5.43 acres and located within the Diridon Station Area Plan. The entire site is bounded by North Autumn Street to the west, West Julian Street to the south, and the recently opened Autumn Parkway to the east. It is partially occupied by industrial buildings and parking lots with 287 spaces. The surrounding area is experiencing rapid changes, as the San Jose City Council recently agreed to negotiate with Google to sell them nearby, City-owned parcels for the tech giant’s newest village.

“This is one of the last development opportunities in the Bay Area that truly brings together the concept of multi-modal transportation, amenity-rich infrastructure, and state-of-the-art workspaces,” said Matt Field, CIO at TMG Partners. “Downtown San Jose has come into its own with its vibrant cultural scene, diverse housing offerings, and a strong and growing technology sector making it attractive to employers and employees alike. We have an opportunity to create an iconic headquarters location that will appeal to Bay Area employers of all sizes.”

“We are excited to continue playing a role in the City’s plan for marketing itself as pro-business and pro-smart-growth,” said Steve Fisher, principal of Valley Oak Partners, LLC. “Demand for the kind of high-tech office space that we’re building with TMG is greater than it’s ever been, and companies are increasingly becoming more invested in the neighborhoods in which they operate.”

The development has immediate pedestrian accessibility to the Guadeloupe River Park across Autumn Parkway, and is a ten-minute walk to the restaurants at San Pedro Square and the financial center of San Jose. It is also a short walk to Diridon Station, San Jose’s intermodal transportation hub consisting of Caltrain, VTA Light-Rail, along with the planned BART and California High Speed Rail station, and is proximate to the SAP Center arena.

This proposed plan builds upon TMG’s increased activity in the San Jose office market. In 2013, TMG and Fortress Investment Group purchased an eight-building, 810,000-square-foot campus from Cisco Systems. The partnership subsequently sold four buildings to an investor in late 2014, while simultaneously executing a major renovation of the building exteriors, interiors and common area amenities on the balance of the project. Reintroducing the remaining four buildings to the market in late 2014 as Champion Station, TMG closed on the sale of the campus in the summer of 2016 in two separate transactions, one building to a corporate owner-user and three buildings to an investor. In August 2016, TMG acquired 2460 and 2480 N. First Street, a two-building, 148,000-square-foot commercial property that TMG is currently renovating and leasing.

About TMG Partners
TMG Partners, founded in 1984 and headquartered in San Francisco, is a full-service real estate development and management company. TMG has developed more than 25 million square feet of property throughout the San Francisco Bay Area, including Emeryville, Marin City, Novato, Palo Alto, San Bruno, San Jose and San Francisco. One of the most active developers in this area, the company has developed a variety of office, retail, residential and industrial properties, ranging from office campus and multi-story properties in urban, infill locations to mixed-use retail and single-story suburban buildings. For detailed information, visit www.TMGPartners.com.

About Valley Oak Partners
Valley Oak Partners, LLC is a San Jose based real estate development and investment firm located in the historic Del Monte Plant 51 office on The Alameda. The company focuses on entitlement, investment, and construction of commercial and residential real estate. Valley Oak Partners was founded in 2008 and since that time has acquired, re-developed, or is processing entitlements on over 2,300 residential units and approximately 1,500,000 square feet of commercial development. For more information, visit: www.ValleyOakPartners.com.

About Kohn Pedersen Fox Associates
Kohn Pedersen Fox Associates (KPF) is an international practice headquartered in New York, with offices in London, Shanghai, Hong Kong, Seoul, and Abu Dhabi. The firm provides architectural design, programming, urban design, master planning and graphic design services for clients in both the public and private sectors. Their extensive portfolio includes a wide range of projects, from civic and cultural spaces to hotel, residential and office towers to educational and laboratory facilities. KPF’s strong body of work has garnered over 300 awards and earned the firm recognition as one of the most respected architectural design practices in the world. For more information, visit: www.KPF.com.