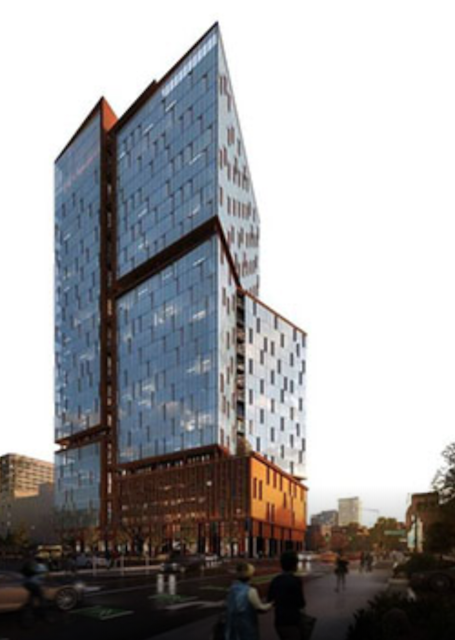 “2201 Valley brings balance to the greater Bay Area’s traditional regional job centers and adds to Oakland’s still-burgeoning identity as the center of dynamism and diversity,” said TMG CEO Michael Covarrubias, an Oakland native. “The proposed building’s large open floors, high ceilings, and column-free spaces – made possible by the engineering required to span the BART tunnel that runs beneath the site – form the kind of creative work space ideal to growing companies.”

Located only a block from the 19th Street BART Station, 2201 Valley is designed to achieve a LEED Gold designation. The building, designed by Solomon Cordwell Buenz, has proposed fanned vertical steps that embrace the structural requirements of the BART span, and resolve into a visually distinct, stepped vertical tower broken by outdoor terraces and landscaped decks. The building lobby faces towards Broadway and the HIVE along West Grand, and the 10,000 square feet of ground floor spaces include dramatic 30-foot ceiling spaces for local retailers and artists to embrace the Uptown arts and retail community.

“Our project includes a variety of indoor and outdoor spaces for people to work and gather, supporting Oakland’s distinctive identity as a new mecca for technology and talent within the broader landscape of the Bay Area,” said Denise Pinkston, partner with TMG Partners. “Over the past year, we have worked with the public and community representatives to develop our project and believe the result is an Oakland-inspired design that makes a lasting architectural contribution to the city’s skyline.”

Benefits to the community include replacing a surface parking lot and contaminated gas station with:

TMG currently owns and is renovating two other Oakland properties at 1330 and 2201 Broadway.