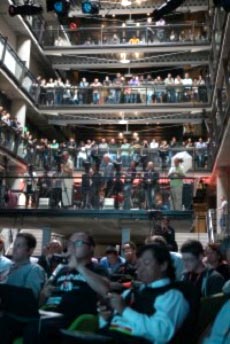 Zynga Inc. is using some of the money it generated from the sale of virtual buildings in games like "CityVille" to buy a real building — its own headquarters in San Francisco.

The social game company agreed to pay $228 million to buy its 670,000-square-foot building at Eighth and Townsend streets, according to a document Zynga filed Monday with the U.S. Securities and Exchange Commission.

Zynga agreed to the deal Friday with the building's owner, 650 Townsend Associates LLC., and deposited $25 million in escrow, the filing said.

Zynga moved into the building last year to accommodate its growing workforce under a lease signed in September 2010.

Zynga currently leases about 65 percent of the building, with the rest either leased by other companies or vacant. Zynga had 2,846 employees worldwide by the end of 2011.

UPDATE: A Zynga spokeswoman declined to comment on the company's future plans for the building.

In other news, the company has just officially relaunched its main website as its new Zynga Platform for social games